THE 26 DIFFERENT ARABIC VERSIONS OF THE QUR’AN 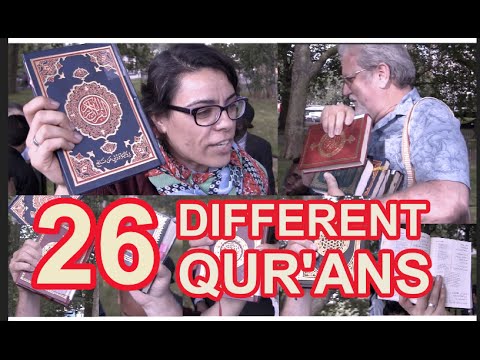 Muslims claim to have just one Qur’an, which has never changed over the past 1400 years. Jay Smith and Hatun Tash decided to dispel these claims by introducing 26 different Arabic Qur’ans they have found which exist in the Arab world today, and all include slight changes from one to the other!

Watch the crowd as they begin to hold up just 14 of the 26 which they have to the growing audience. It is obvious that they do not like what Jay and Hatun are suggesting. For they claim that with the two most popular versions, the Hafs and Warsh Qur’ans, there are over 1,000 diferences.

What’s more, when you compare the other 12 you can find over 5,000 different changes.

This was too much for the crowd, as they surge forward, even one man claiming that he would ‘stab’ Jay if he continued, and then proceeded to ‘give him the finger’.

This all proves that the Qur’an did not come from God, but from man, and so is like every other book written by men; open to error.